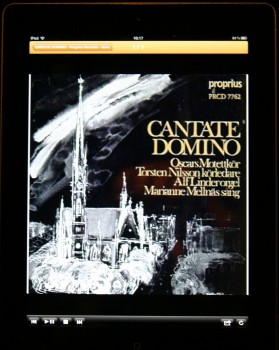 Today it is no more a problem the fact that the music signal , once it is changed into a digital domain, will never leave it until the conversion for the final listening happens. Today the most important thing is that the digital signal suffers the least possible manipulations and conversions in different protocols for the storage.

The analogical audio signal is collected by the microphone , amplified by the pre microphones, converted and sent to the hard disk of the computer through the outside electronics which communicates with it. Then, for the work project, the graphic multi traces representation of the editing program will be used, to carry on the necessary cuts ( only a graphic operation and not a change of the audio file). In this phase the digital signal is still the one stored in the hard disk during the recording. When the cuts for composing the piece are made, the digital files are not moved or changed, in fact the computer reads the recording pieces on the hard disk as they were organized on the graphic reconstruction.  Once the cuts and the levels of the different traces have been done in order to get the final sound result, if the product is fixed for any kind of 2 channels support , the stereo trace is created.

The multi channel trace in the desired format ( DOLBY, DTS, DVD AUDIO) is created if there is a multichannel support. Only during this phase the algorithms of the chosen program process the data to change the different traces of the first recording in the 2 or more requests for the production of the support to be commercialized. This operation is called “Bouncing”.

This phase is the only one that, for the first time in the audio recording, changes and elaborates the stored data on a digital support. This state of the signal is comparable to the passage, in analogical one, from the multi traces tape to the final 2 traces master, which I’m going to call “2 Channels Digital Master”. It will be appropriate that this state of audio data remains like that until the final reconversion in analogical one for the final listening.

Since the digital data have to be transferred on an optical support ( CD or DVD) the signal undergoes other changes and repackagings. The data stream for the audio CD production is coded according to the Read Book protocol for the production of AUDIO DVD according to the format MLS PASS and so on for the other formats.  Then it is stored in the optical support generating a Master for the burning and then the Glass Master is produced for the industrial printing of the CD or AUDIO DVD.

When the listening on the home system happens, the optical support is read by the laser of the cd or dvd reader and interpreted by a special decoding chip in order to be reconverted from digital to analogical one for the final listening.

My experience as a producer suggests me that on the first Bouncing the signal undergoes an important decline. But since the multi traces have to pass to 2 channels, this decline is bound to happen. During the listening of the produced CD, that is after the decoding process in the requested format, the burning and the next industrial production of the support, the signal undergoes a further decline.

These last passages, from the inevitable Bouncing until the conversion from digital to analogical, can be avoided by listening the “2 Channels Digital Master” that is “Liquid Music”.

This state of the signal can be given to the last user, put both in a digital memory ( any Drive Pen or HD for example) and transmitted by Internet in his full format. From the solid memory the data stream is sent , through a USB device, to any reading device, such as musical server of Hi.End quality, computer organized, File Readers, etc.

These ones will send to our converter the signal of the “2 Channels Digital Master” through SPDIF as an old CD reader does. Finally, after the DA conversion, the analogical music message transmitted by “Liquid Music” will be reproduced by our loved home system.

1 Recording through microphones ( conversion from sound pressure to electrical signal)

3 Analogical-digital conversion and sending of the digital support, usually hard disk. ( The signal changes from analogical to digital state. It remains under this form until the reconversion into analogical one for the final listening. Only exception if it has to be put in LP)

4 Cuts and output levels ( this phase does not change the audio file. All the operations are carried out on graphic representations)

5 “Bouncing “ unification of all traces, carried out by the algorithms of the editing program in order to draw the 2 stereo traces. ( This process changes the original audio data acquired in the recording studio for the first time). On this occasion the “2 Channels Digital Master” is created.

6 Repackaging of the digital audio files according to the Read Book with prompt burning. It is produced the Master from which CD or DVD are industrially produced.

8 final printing of the CD or DVD

Reproduction in the recording studio

9 Cd reading from the device “Cd Players” with correction of mistakes from the chip containing the algorithm Read Book  ( Read Book foresees that, in case a CD data is not acquired properly during a CD reading, the “Invented Read” is implemented starting from the data foregoing and following the not read bit)

10 Final conversion of the digital data stream in analogical from the audio converter DAC.

The passages 6 and 9 included are jumped from Liquid Music. The signal “2 Channels Digital Master” transferred trough USB, FIRE WIRE devices or transmitted through the protocol via Internet, is read by The File Reader and converted directly from the converter DAC of the reproduction system.