The Season Of The Viola Da Gamba – Fabrizio Lepri (DL004) 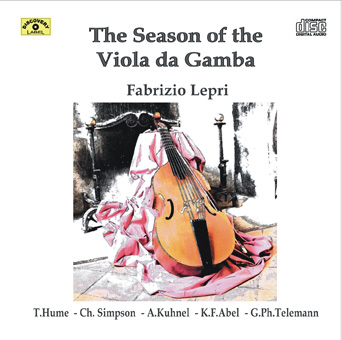 The history of the “viola da gamba” as an instrument to be played alone namely without accompaniment is a long and articulate one.

The first compositions in such sense can be considered those published by Silvestro Ganassi and included in the treatise “Regola Rubertina 1542” and “Tratado de glosas , Roma 1553” by Diego Ortiz; even if the two composers, clever at playing this kind of instrument, tend towards the development of an horizontal technique of the viol more than an harmonic one. To arrive towards a polyphonic and harmonious use of the leg viol which is like the lute, you have to wait for the beginning of the seventeenth century.

The direction towards this new kind of instrumental language asserts itself thanks to the work of the leg viol’s English player such as Tobias Hume (1569? London, 16th April 1645) , composer of the collection “The first Part of Ayres” (1605) . This collection includes 115 passages, most of which are only addressed to the leg viol alone. The biographic news about this composer are very brief even if they are rich of fascination. Hume was a strange man and this can be found in the titles of his passages which are really bold.

Actually, although he was a very talented composer, he preferred to be considered a professional soldier who played some music for his own pleasure as a well-groomed captain. He was a clerk in the Russian and Swedish Army and he retired in 1629.

In the first half of the seventeenth century England won its gold period thanks to the leg viol’s English player like Christopher Simpson (about 1605, London 1669). His famous collection “The division viol”(London, 1669) besides including an interesting part of treatises it also includes passages of a remarkable compositive thickness.

The popularity of this instrument developed from England to France and Germany and it enjoyed a great consent as a soloist instrument with or without the bass’ accompaniment . In fact a prolific and careful composer such as Georg Philipp Telemann (1681 Amburgh 1767), although he wasn’t a leg viol’s player, dedicated to this instrument a primary space in his chamber production. Another great player was August Khunel ( about 1645 -1700) who was able to adapt the great success of the italian violin’s aesthetic to the leg viol’s technique in his collection “Sonate o Partite 1689”, even if he tried to keep up the leg viol’s form and style. The last leg viol’s great player was the German Karl Freiderich Abel (1723 London 1787).

He lived the last splendours of an instrument which had played an important role for more than three centuries and which was drawing toward the end. The leg viol was upset by a musical aesthetics which was turning to Classicism and it never adapted itself to a pragmatic and rational art , where its close sonorities resounded like the heritage of an archaic world. 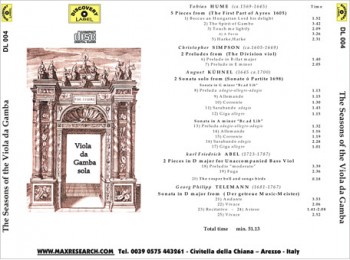 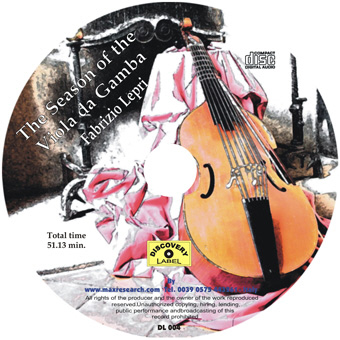